An awesome friend and I went to Brisbane last week to see one of our favourite bands, Mumford & Sons. We hung out in the Queen Street Mall for a bit and I thought it was a great opportunity to see how much I could scare the pants off myself and also make my awesome friend totally uncomfortable in the process!

I jumped up onto a big wooden bench and gave a talk for six minutes about the transformative power of being uncomfortable: 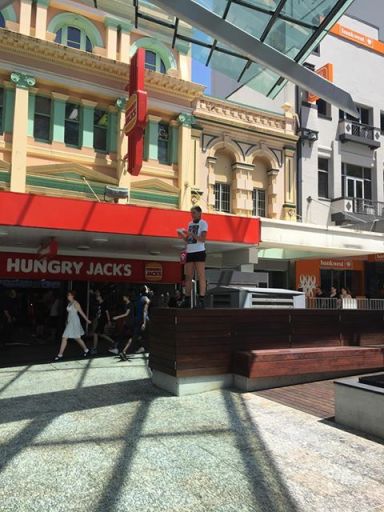 I gave the same talk the day before in Bundaberg, but the reaction there was weird: it was like I didn’t exist, even though I was shouting at the top of my lungs and there were two ladies from the council setting up an art project right near where I was screeching. They didn’t look in my direction at all and neither did anyone else, well, that I could tell anyway. “See?” I said to the cool guy, “I told you I have the super power of invisibility!”

In the mall though, people stampeded on and on, but there were quite a number of them who stopped momentarily and one man even stayed until I’d finished talking so he could congratulate me and shake my hand. That made me feel pretty damn good! Invisible: Bundaberg, Invincible: Brisbane. Together: Courageous and unstoppable! A good set of super powers if I do say so myself.

I got scared doing the talk both times, but both times I didn’t implode. Doing stuff like this makes me feel like I own the sky. It’s a pretty cool feeling and cooler still is that the sky is so damn huge that we can all own a little bit for ourselves; the asking price: a tiny piece of your comfort zone.

Step onto the path and courage will find you