I wrote a post earlier about doing a street slam in Bundaberg. Well, I didn’t go into Bundaberg last week, so I did a Woodgate slam instead, to an audience of one: my mum! I got up on a picnic table opposite the caravan park cafe on the esplanade and recited two poems that I’d rewritten: Desiderata by Max Erhmann and Do Not Go Gentle into that Good Night by Dylan Thomas.

I changed the words a bit because I find the first one a bit too prescriptive and the second one a bit too morbid. I laced them with my own ideas of hope and positivity instead. Click here for the transcript.

A few people walked up from the beach to go back across the road, but they looked in the other direction and acted like they couldn’t hear me. I find this unbelievably strange! Do they do this because they’re so used to seeing people stand on table tops or is it because they’re scared that I might be dangerous, or maybe they’re just really, really busy! It’s hard to know what other people think, but my curious mind wouldn’t let me just pass on by as though nothing strange was happening. I’d simply have to stay and listen, even if it was just to see what would happen next. Who knows, I could’ve started tossing $2 coins into the air after I stopped speaking. I also could have done a little jig, which would have been worth more than ten handfuls of $2 coins. 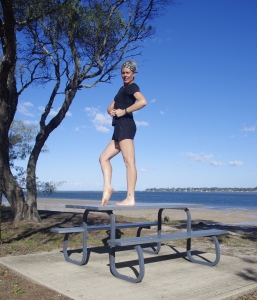 Me and a tabletop today, not yesterday, but you get the idea.

Do Not Go Gentle

Conquer tabletops and your fears