I’ve been hanging to try skating on the road for ages, but got scared about scratching up my roller derby pads (you can’t skate on wooden rinks with scratched pads because they wreck the floor when you inevitably fall over). I guess I could have gone without pads, but I was a bit scared about scratching up my elbows, knees and hands! So, I got some of this disgusting green felt stuff to stick on my pads to stop them getting wrecked. Great idea if you can fall on your pads instead of on your backside. I fell right on my arse in the first ten minutes! I know to fall forward, because that’s what I do at derby, but it’s really hard to overcome the repulsion of going face-first into the bitumen. My tail bone is still killing me!

So, I skated out along the road to the 2km turn around point and didn’t fall over again. Overall, I would have skated around 3km. Hot mix is definitely easier to roll on than the blue metal, but it’s also easier to get stuffed up on bits and pieces that sit on top of the hot mix. The wheels get caught on rock and sticks, but they roll right over them on the blue metal. It’s rough as guts though! I’ve got road wheels on my skates and the bearings are different to my rink wheels. They kind of freak me out because they spin more freely than my rink wheels.

It’s scary skating on the road. I’m always really worried I’m going to fall over. I’m very conscious of hurting my bony arse and hips, but I’m glad I did it. It was heaps of fun and next time I do it, I’ll be better than I was the first time I did it. If I keep it up, imagine how good I’ll be in a few month’s time. I’ll rock that shit!

It’s easy to give up if something is hard in the beginning, or if we’re scared. The problem with that is that ALL new things are hard (and sometimes scary) in the beginning. They’re hard because we’ve never done them before and it feels alien to engage in a totally new behaviour. Plus, most of us don’t like making mistakes because it gives us an icky feeling, but mistakes are how we learn, just like how I learnt that it’s easier to skate on blue metal than it is on hot mix, which was pretty much opposite to what I thought would happen before I tried it.

I don’t expect to ever be an expert at skating, although the idea is nice. My idea of being successful at skating is that I can do it without falling over and feel like I’m having an awesome time. If that’s my measure for success, well, guess what? I’m already smashing it! 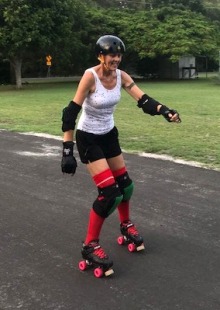 Confidence isn’t something you can find out there. Confidence comes from taking action.

Adventure can do this.