I wanted to do something cool today, but couldn’t come up with anything, so I decided to walk to Childers. It was a good opportunity to try out the sign I had made for the back of my pack for the charity hike I’m about to do. I also thought I should re-familiarise myself with hiking along the road. 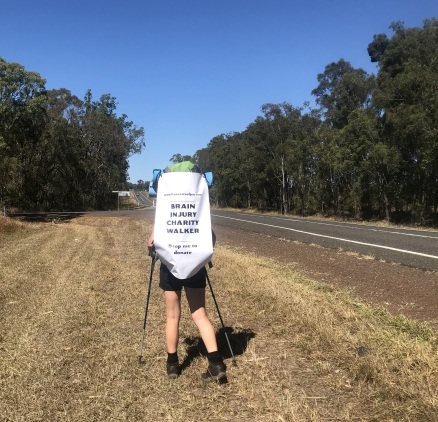 It was cheating a bit because I got dropped off 16km out from Childers AND the pack only weighed around 10kg. I imagine it’ll weigh at least twice that when I get going on the actual hike. PLUS, I had a chocolate thickshake when I arrived in Childers after only 3.5 hours of walking. .

It’s been three years since I did my last charity hike along the road and man, I’d forgotten how damn terrible walking along the road is! There’s two reasons why it sucks: one is the traffic and the other is the shoulders. The shoulders are nearly always sloping and that makes the going very difficult because even though the slope is only really slight it’s enough to put extra pressure on one side of your body. I don’t have bad knees, even so, this does get to my knees after a bit. There’s nothing I can do about it though, so I just have to suck it up. I can’t do anything about the traffic either. After all, that’s what the road is there for. It’s hard to describe what it’s like until you’ve hiked along the road. It gives you a totally new perspective of being a motorist. Some of the stuff people do on the road is pretty unbelievable. The overtaking is the craziest. It’s for that reason that I try to walk only on the left. I nearly got hit by this crazy overtaking mofo on my last charity hike. You just get to see stuff when you’re walking that you don’t see when you’re driving. Some of it is a real eye-opener!

I didn’t really see anything particularly interesting on the 16km other than a dead bearded dragon. Poor thing 😦 I picked him up and put him in the bush near the road so he wouldn’t get all smooshed up. He’d only just been hit.

I snuck into an avocado farm and walked along the edge of the plantation for a fair way to avoid a section of road with almost no shoulder. I always get scared when I do these cheeky maneuvers  because I don’t want to get into trouble, but no one came out ranting and raving. At least  I’ve got the sign this time. I didn’t have that on the last charity hike I did.

I took this photo because it’s quintessentially Childers; cane bales set to go to fibre production with canefields in background.

While I was walking I got to wondering what it is about hiking that I like. I think the main thing that gets me is that it allows me to rise above all else because when I’m hiking, there is only hiking. I can’t go and do just one more thing (something I do to get past feeling unmotivated), I can’t tell myself that in ten minutes I will go get the washing off the line, send one more email, write 100 more words, and I can’t go and have a little lay down. I just have to keep hiking because that’s all there is. It basically absolves me of all of my responsibilities, which means I don’t worry about anything at all while I’m hiking because what would be the point? Ultimatley, it’s a way to free my mind.

Free your mind by way of adventure