Sometimes people tell me I’m skinny. I don’t think I am, I’m just really fit, so I have a fair bit of muscle and not much body fat. This doesn’t happen by accident because I train pretty hard, which is why I don’t really like getting told that I’m skinny. I just think that people aren’t generally used to seeing women who are my age and look like I do.

When I was a kid, I was teased for being fat. I don’t even know if I was. I do know that I was taller than everyone else in my classes all the way through primary school. It wasn’t until around grade nine or ten did the boys start to overtake me in height, and even then, there were only about four of them. Mr Fell, who was a teacher at my primary school in Hervey Bay whispered in my ear one day, “Jenny needs to go to Jenny Craig” What kind of an arsehole says something like that to a kid?! Ugh.

Me and Fatty have started hanging out a fair bit lately. This is Fatty in his natural habitat. Taken on the latest secret track I discovered in Woodgate: 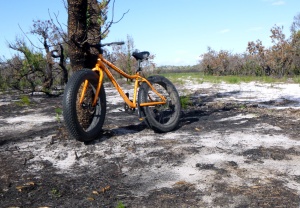 I found a secret track on Google Earth a while back, so yesterday I set out with a hand drawn map (I don’t have an internet phone) to see if I could follow it: 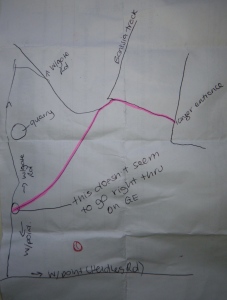 I rode for two hours, mostly through deep sand along the secret track and back home again. It would’ve been around 30km. It was a really hard ride, but still, it was awesome, and this time I didn’t fall off, although I came close a couple of times. See, the bike needs to go forward when I’m on it, which is the whole concept behind cycling, and if I don’t have enough momentum when I hit a deep patch of sand, then over I go. It all happens in slow motion and is quite painless due to the soft landing. Getting the sand out of my shoes, and last time out of my hair and ear, is another story, especially when I’m all sweaty.

I fell off once due to a spider’s web. I’m really scared of spiders and I rode down yet another secret track and went face-first into a spider web. All I could think of was having a giant spindly-legged beast on my face or on my helmet and I screamed (even though I’m a girl, I rarely do this and my screams sound nothing like you’d imagine a girly scream to sound)  and jumped off the bike mid pedal, it stopped going forward and promptly fell on my leg. Fatty is heavier than a regular mountain bike (due to his obese wheels I’d say). This was about three weeks ago and I still have the bruise. There was no spider. This is how big a spider is:

But this is how big it feels to me, even if its non existent:

I looped around back to a track I’ve ridden down multiple times and Fatty said he wanted a rest, so he posed for a photo here: 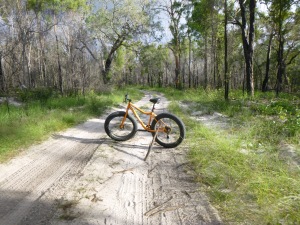 I love Fatty, but it wasn’t always like that. And the thing is, he doesn’t even belong to me. He belongs to the cool guy I’m married to. When the cool guy bought this bike I told him he was being ridiculous. “It’s a stupid fad these fat bikes. We’ve already got bikes, why do you need one like this? It’s ridiculous, look how big the wheels are!” It’s pretty funny now that I’m the one who rides Fatty all the time and am always going on and on about how great it is to have a bike that can do the things that Fatty can do. There’s no way in hell I’d ever be able to ride a regular mountain bike in the places I take Fatty, and there’s no way I’d ever be able to make a regular mountain bike go as fast as I can get Fatty to go. On Fatty I feel like I’m invincible. I didn’t like Fatty in the beginning and sometimes it’s good to be wrong about things. Mr Fell was wrong about me too, when he believed I was worthless, and I was wrong about myself for a long time believing that I was fat, ugly and nonathletic.

Be wrong and see where it can take you