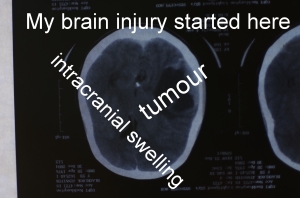 This week it’s Brain Injury Awareness Week. Yay for my brain, yay for yours and yay for the collective brain. Insert fist bump or maybe brain bump here.

If you saw me you’d never think I had a disability. That’s what it’s like to live with what is known as the Invisible Disability: the prosopagnosia, the dyschronometria, which still impact me and the aphasia and dysphasia of the early days are buried behind the “normality” of my appearance. So is the severe spatial reasoning deficit, the compromised working memory, emotional hyperactivity and the grand old executive functioning deficit. I’m not providing any definitions for these things because I was given none when I was discharged from hospital and I had to work out from scratch what the hell was wrong with me.

See, no one told me I had a brain injury. They just packed me off home with instructions to sort out my things and prepare for imminent death. They literally said that to me. One doctor patted me on the back of the hand, nodding and smiling as she said, “now, you just go home and sort out your things. I won’t need to see you anymore.” Then she turned on her heel and walked off into the waiting room full of people, all of them looking up to her with hope in their faces as she floated by. I looked at the big window in front of me and wondered if anyone would notice or care if I just smashed my way through and fell four stories to the concrete below.

I did smash my way through, not the window, but life instead. I refused to believe that I would die and I nearly lost the fight several times, but I’m still here, stronger and better than I ever was before. What happened to me changed me, my life and the lives of those who chose to stick around when things got really hard. There’s no going back to the way things were before and that was so difficult to accept. I lost a lot and sometimes I still lose, but that’s ok because that’s what life is, not just because I’m brain injured, but because that’s what happens when you’re a member of the human race.

I never really understood disability before I became brain injured. I certainly had no idea what being brain injured meant for a person’s life and the wide-reaching impact that it could have on their families, friends and communities in general. There are over 700 000 Australians living with brain injury and I’m one of them. So are my friends in my local STEPS support group. I see what my friends struggle with and that’s why I’m reaching out to everyone I know and everyone I don’t know to help me raise $40 000 to support what The PA Research Foundation does through STEPS:

I’m walking 450km on my own from my home in Woodgate to the Brisbane CBD to kick off my fundraising. This map involved physical cutting and pasting (like we all did in primary school), photography and drawing. This is what happens when you’re not a cartographer and don’t want to spend a week trying to get Google Maps to do what you want it to do. As a result, this map sucks, but for the itinerary click here. 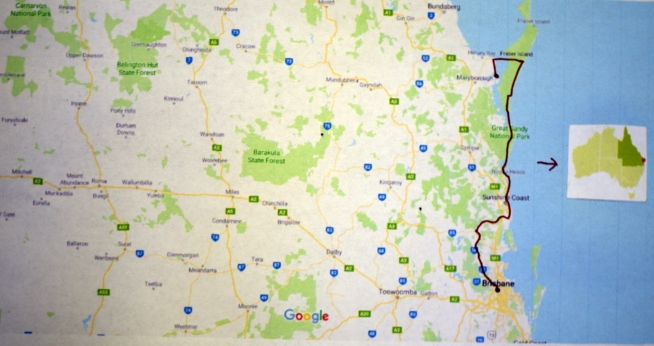 An adventure I will make