I went for a run on the beach. It was just getting dark as I arrived. I’ve been avoiding running in the dark for a while because some bastard stole the three $2 solar lights I’d put at the start/finish and the 8km and 10km turn arounds. I don’t know how (or why) they got them down because the one at the start was at the very top of a huge pole (although this one could have rusted off) and the other two were way up in trees in the dunes. I must admit, the ones in the trees were kind of freaky. You could see them way off in the distance bobbing around like they were spectres hanging in mid air. Perhaps curiosity, not tightarsedness got the better of whoever took them.

After the lights disappeared I tried running a few times in the dark, but everything just looks so different at night. I could never make out where the start/finish was and a couple of times I ran straight past it. I lamented, “Oh woe is me! I need to run, but it’s dark, how will I cope? Oh, life is so hard.” Then I remembered that I had a headlamp.

“That will never work. It will just keep falling down the whole time. It will be annoying and get in the way. Don’t do it. Just go home and do nothing instead,” my mind said.

“You again! How many times have I told you to shutup?” my brain yelled.

Gees, I thought, aggressive much? Someone really needs a runner’s high by the sounds of it.

So off I set with my headlamp, which by the way, doesn’t fall down, doesn’t get in the way and is only the smallest bit annoying.

The moon sat huge in the distance, not far above the water, and as I ran I felt that I was running into the moon. I didn’t even need my headlamp because the moon was its own dark sun. My bare feet hit the sand at their own pace and my breathing became steady and rhythmical. I marvelled at the awesome tool my body is. I felt my abdominal muscles flexing and working with the slight rotation of my body as I moved ever closer to the moon. I visualised my shoulder muscles working and building as they moved my arms in time with my legs. I ran into the moon and I was the moon. I became the beach and became the run. I was the air and I was the night.

I was able to surrender myself completely to the experience because a while back I decided to try something new. I’d never been a runner, never. In fact, I avoided running with the same conviction that I now approach it. I’m never going to be the fastest or best runner, but that’s not my goal. My goal is to run and sometimes, just by doing that, I get to run into the moon.

Don’t be put off by what others can do or have accomplished. It’s what you can accomplish that matters. It took me what seemed like forever to run 5km without feeling like I was going to die, but bit by bit, I got there. If my goal was speed I would have given up, but with a goal like beauty, I can’t lose because beauty is everywhere, especially when you’re running into the moon. 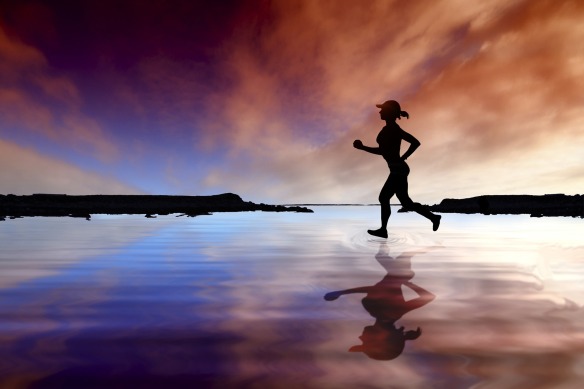